Dr Watson is Holmes’ friend and assistant. He is a warm, likeable character who also serves as a way of guiding the reader’s response throughout the unfolding of the mystery.

• Watson is rather in awe of his clever flat-mate, Holmes, describing his ‘great powers’ of deduction.

• This phrase is repeated to show Watson’s great admiration for Holmes, suggesting that Watson feels humble in comparison.

• Watson is used to illustrate the brilliance of Holmes’ mind and to ensure that we, the readers, also believe that Holmes is an amazing detective.

‘if I can be of any service’

• Watson jumps at the chance to help Miss Morstan.

• This shows his polite and honorable nature, and his desire to help others.

Context: In the Victorian era, women were seen as weak and vulnerable with men taking the role of their stronger protectors. Watson neatly fits into this convention of a chivalrous gentleman.

• Watson is an ex-army doctor who has been injured in the Afghan wars and is now on a small army pension.

• The use of the word ‘weak’ followed by the comparative adjective ‘weaker’ shows how Watson is a realist when it comes to marrying Miss Morstan. He is aware he would not be viewed as a good match. There is perhaps humility or bitterness in this phrase. It is possible that Conan Doyle was using Watson’s position to comment on the unfair social structure of Victorian England.

Context: Victorian marriages were arranged on the basis of wealth and social status and Watson is a poor ex-army surgeon, not in a position to marry a rich woman. This shows how wealth can limit happiness and true emotions such as love.

‘“You really are an automaton- a calculating machine!” I exclaimed’

• Watson accuses Holmes of being inhuman, like a machine.

• The use of the verb ‘exclaimed’ captures Watson’s emotional response to his friend’s lack of feeling while the semantic field of engineering to describe Holmes highlights Watson’s different, much warmer personality. The two men are often viewed as representing opposites: logic and rationality versus emotion.

• Despite the differences between the men, Watson is not so in awe of Holmes that he does not challenge his friend’s actions and attitudes. The lively accusation illustrates that Watson is able to be honest with Holmes.

‘ready to devote my life’

• Watson states how dedicated he is to finding the treasure for Miss Morstan, despite the fact that this treasure will take her beyond his reach.

• This shows how he puts his love for Miss Morstan above his own happiness. His selflessness contrasts to the greed and selfishness of the criminals in the book.

‘We MUST catch her!’ cried Holmes, between his teeth’

• Holmes is desperate to catch the Aurora, the boat on which Small and Tonga are escaping on.

• He is seen here as a man of passion and commitment; his tense excitement is clear in the exclamatory sentence and the observation that he is speaking through clenched teeth.

• Holmes uses the modal verb ‘must’ to create a desperate sense of urgency. This reveals his great desire to bring the criminals to justice and also serves to increase the dramatic tension of this scene.

• Watson tells amusing tales of his time in Afghanistan with the British army.

• His muddled tale of the ‘tiger cub… and musket’ are used to impress Miss Morstan.

Context: As a sheltered Victorian governess, Miss Morstan would have travelled little and tales of the exotic eastern country where Watson was a soldier would have been designed to thrill. This reflects the interest of the British public in the countries within or near the Empire.

‘our pistols rang out together’

• Watson, with Holmes and Jones, fires at and kills Tonga.

• Watson is physically brave here, adding to our positive perception of him.

• There is a sense of teamwork here, a sense of equality with Holmes, as they work together.

• The simple sentence also works to enhance the drama and tension at the end of the river chase.

Does the narrative technique work to simply show Dr Watson as a foil to Holmes?

Yes: He is the archetypical sidekick and is used primarily to highlight Holmes’ brilliance. The repetition of ‘great powers’ encourages us to see Holmes as Watson does- as someone with superior intelligence. Conan Doyle uses Dr Watson as the narrator for his story and this first person narrative voice allows us to see all events and characters through Watson’s eyes so we, the reader, accept Watson’s view of Holmes as incredibly intelligent and we do not question this. Watson works as an audience proxy; he allows the reader to experience his emotions and he asks the questions about the mystery that we, the reader, would like to ask. So he is really just a contrast to Holmes and a plot device – nothing more.

Conan Doyle was following the example set by Wilkie Collins’ novel ‘The Moonstone’ in which the main character also had a less intelligent companion. Conan Doyle clearly emulated this and, using Doyle’s and Collins’ examples of sidekicks, the genre of the detective novel has evolved with the sidekick to the great detective as a key feature, with crime writers such as Agatha Christie and Robert Galbraith providing sidekicks for their main detectives.

No: The first person narrative also allows us to feel empathy with Watson as a character and we feel very close to him as we witness his falling in love, his action in the drama and the relationship with his friend. Conan Doyle was also a doctor and he uses elements of himself -such as the medical background- in the novel which means that Watson comes across as a warm, likeable character. A good example of this is the muddled tale of the ‘tiger cub… and musket’; the story is used to impress Miss Morstan but is clearly confused by his great desire to impress her. We are amused, and empathise with the situation and the character. 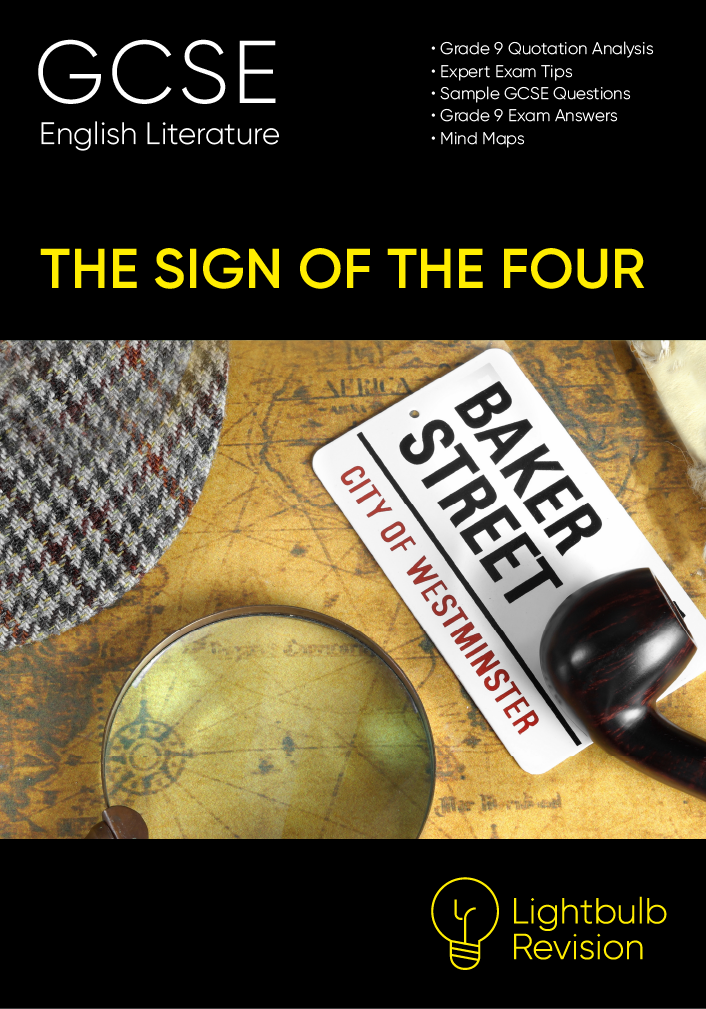