Romeo, the only child of the Montague household, is presented as a passionate and impetuous (quick to act) young man whose love for Juliet is so strong that he kills himself rather than live without her.

At the start of the play, Romeo is horrified when he is told of the street fight.

This foreshadows the violence and pain that his true love will bring him later in the play.

This negative vocabulary reflects how Romeo abhors the conflict, showing himself as a peace-loving young man.

‘She’ll not be hit/With Cupid’s arrow, she hath Diana’s wit’

At the start of the play, Romeo speaks adoringly of his current ‘love’, the lady Rosaline.

The rhyming couplets ‘hit/wit’ seem contrived and artificial, just like his love is at the start of the play for Rosaline.

The audience sees his immaturity here; his love is based on a passion for a woman he barely knows.

The audience would be amused by this melodramatic languishing on Romeo’s part as the hyperbolic praising of Rosaline is every cliche of a love-struck young man.

Context: Romeo uses the Petrarchan language of courtly love. This is when a man worships a lady from afar, writing love poems to a woman he cannot get close to.

The religious imagery is used here to show the purity of their love and Romeo’s respectful attitude towards Juliet.

Context: This also validates their relationship for the original audience; Christianity was a fundamental part of Elizabethan life.

‘O she doth teach the torches to burn bright!’

When Romeo first sees Juliet, he falls in love with her beauty. The metaphor is a spontaneous outburst of passion which contrasts with the earlier artificial declarations of love for Rosaline. Romeo’s language is more honest and original and reflects how he is maturing from the opening of the play.

The metaphor is full of emotion; the plosive ‘b’ sounds capture Romeo’s passion and enthusiasm.

It also associates Juliet with light, showing her to be dazzling. Romeo falls in love with Juliet based on her looks; this could be seen as shallow but the intensity of his language convinces the audience that this is genuinely love at first sight and there is a real connection between them.

The association with Juliet as shining bright is perhaps also negative as it connects Juliet with star imagery, reminding us that she, like Romeo, is a ‘star-cross’d lover’, doomed to die.

In Act 2, Romeo brings his witty joking with Mercutio to an end.

They have been enjoying a verbal sparring match and the good-humoured banter here shows Romeo to be quick-witted and intelligent. We also see the close friendship between Romeo and Mercutio.

‘fire-eyed fury be my conduct now’

With Mercutio’s death, Romeo is motivated by grief and revenge; here, he is shown to be loyal and brave.

The alliteration of the ‘f’ sounds reveals his anger and the reference to ‘fire’ captures the heat of his temper – and how destructive this temper will be.

Context: Elizabethans believed that love made a man effeminate (weak and unmanly). Romeo is here portrayed as aggressive and ready to fight, putting the love that made him weak to one side to avenge his friend’s death.

When he hears of the ‘death’ of Juliet, Romeo seeks a swift death himself by drinking deadly poison.

The intensity of his love is evident as he seeks to kill himself rather than live without Juliet. This impulsive behaviour, acting quickly without thinking things through, ensures that he plays a part in his own death.

The simile compares the poison working to the lighting of gunpowder, showing the speed with which he wishes to die. It is a destructive, violent image that shows the pain that love can bring.

Structurally, we are reminded of Friar Lawrence’s earlier warning about violent loves culminating (finishing) in violent ends; that prediction is now clearly played out in the apothecary’s shop. The relentless progress of fate is evident, as is the violent, doomed nature of his love.

Does Romeo cause his own downfall?

Yes: Romeo hears about Juliet’s death and shouts ‘then I defy you, stars!’ He addresses the cold, unfeeling powers that govern his life and cause such grief; he recognises that fate has played its part in Juliet’s death but decides to show his own power. By killing himself, he is taking back the last vestige of control, choosing his own place and time of death. Yet if Romeo had not been so hasty, if he had waited just a little while, then tragedy could have been averted. Shakespeare uses the Greek conventions of tragedy which meant that the tragic hero, Romeo, has a hamartia (fatal flaw) which leads to his downfall. It is this fatal flaw of impetuousness that leads to the lovers’ deaths.

No: From the beginning, the Prologue warns us that the lovers are ‘star-cross’d’ and therefore doomed to die. There is nothing Romeo could do to avert his fate: by choosing suicide as his course of action, he plays into the hands of fate, becoming the first of the ‘star-cross’d lovers’ to die.

The Elizabethan audience would have firmly believed in predetermination, that our lives are set out for us by fate. Shakespeare explores in the character of Romeo the idea of self-determination; that our own decisions and choices have clear consequences. 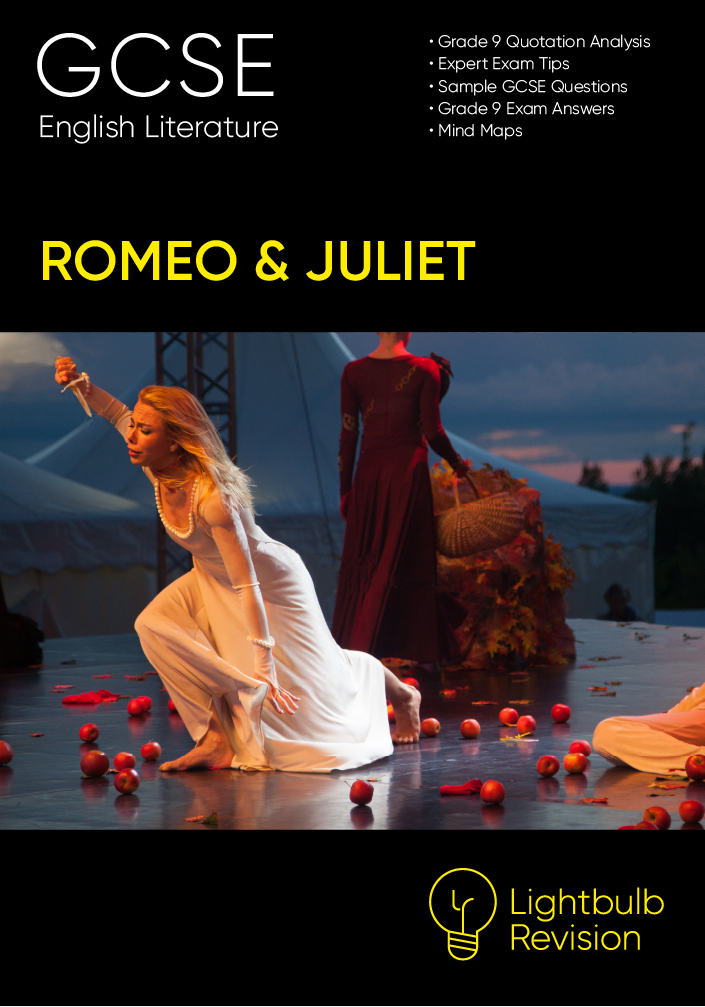