‘Macbeth’ is a story which covers huge political upheaval in Scotland but also documents the personal tale of a man whose ambition leads to his downfall. The action of the play spans over several months and moves from Scotland’s battlefields to Macbeth’s castle to the English court and back to Scotland. It isn’t necessary to know exactly what happens in each scene; the timeline below outlines the main events over the course of the play.

The story starts with a bloody civil war. King Duncan rewards Macbeth for his loyalty in battle with the title of Thane of Cawdor.

The witches meet Macbeth and make their predictions that Macbeth will be Thane of Cawdor and then King.

They also predict that Banquo’s children will be kings.

Macbeth is told that he has been named the new Thane of Cawdor by King Duncan.

He immediately starts to wonder if the prophecy about him becoming king will come true and whether he should make sure that it does happen by murdering King Duncan.

Lady Macbeth and Macbeth begin to plan their murder of King Duncan.

Duncan arrives at the Macbeths’ castle.

The Macbeths’ plan is finalised as they plot to kill Duncan and blame it on the servants.

Macbeth is crowned king but he does not have the loyalty of all the Scottish noblemen.

Macbeth is king but he is not confident in his new position. He is worried that the witches’ prophecy about Banquo’s children becoming kings so he hires murderers to kill Banquo and his son, Fleance.

Banquo’s ghost comes to the feast that Macbeth is holding, sending Macbeth into a state of fear and confusion.

Macduff, a Scottish thane, is planning to organise an army to attack Macbeth and replace him with Malcolm.

Macbeth visits the witches. They show him visions which tell him three things;

1. To be careful of Macduff.

2. That no man born of woman can kill Macbeth.

3. That he will never be defeated until Birnam Wood moves to Dunsinane Hill.

Macbeth sends his soldiers to kill Macduff’s wife and children.

Macduff hears the news of his family’s murder and vows to have his revenge on Macbeth.

He allies himself with Malcolm who now has a large army.

Lady Macbeth has gone mad, sleepwalking and washing her hands of imaginary blood.

Malcom’s army arrives in Scotland. The plan is for the soldiers cut down branches from Birnham Wood as a disguise.

Macbeth feels safe because of the witches’ predictions. He is told of Lady Macbeth’s suicide.

Macbeth and Macduff meet in battle.

Macduff reveals that he was not born of woman as his mother had a Caesarean birth. They fight and Macbeth is killed.

At the end, Malcolm becomes king of Scotland. 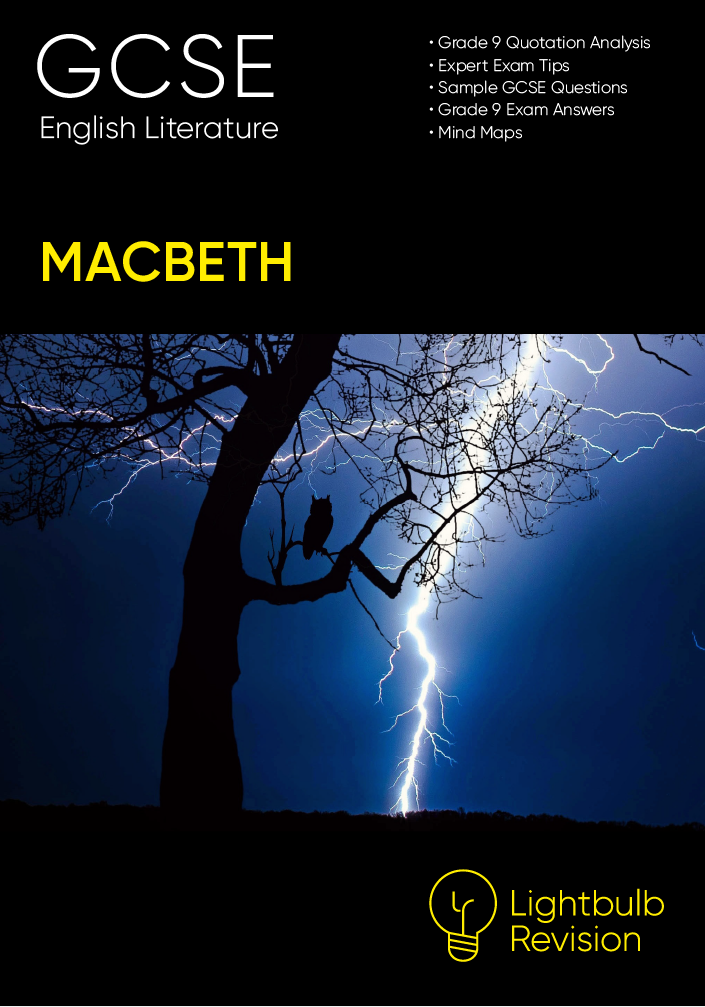