Snowball is the intelligent pig who, with Napoleon, initially takes leadership of Animal Farm. However, this joint leadership soon leads to friction and Napoleon takes ultimate control, chasing Snowball off the farm.

‘All animals are equal’

• Snowball works on Old Major’s speech so that the Animalism is formed with the central concept that ‘all animals are equal’; it is Snowball who writes up the commandments on the wall.

• Animalism. There is a sense of fanaticism and power in the wording of the commandment. The declarative sentence is forceful and the other commandments are similar or use the modal verb ‘shall’ which implies that Snowball is imposing his will on the intellectually weaker animals.

Context: Orwell used Snowball as an allegorical figure for the revolutionary, Leon Trotsky, who was a main instigator of the Russian Revolution of 1917. Trotsky was a fanatic who was partly responsible for the Red Terror of 1918 when thousands of people who opposed the revolution were massacred.

‘Never mind the milk, comrades,’ cried Napoleon, placing himself in front of the buckets’

• Napoleon takes the first opportunity to personally profit from the revolution by taking control of the fresh milk which is later mixed into the pigs’ mash. Even with the revolution only hours old, Napoleon’s self-interest is evident. Orwell meant this incident to be a turning point in the story, showing through the novel’s structure how the revolution is doomed from the beginning because of the ruthlessness of characters such as Napoleon.

• There is irony in the way that Napoleon addresses the other animals with the title ‘comrades’ which implies solidarity even as he plans to betray them.

• We are given a sense of his physical presence by the way he puts his body ‘in front of the buckets’. There is a sense of physical threat in his action, foreshadowing how he will use violence and intimidation later on in the novel.

‘did not actually work but directed and supervised the others… ’Gee up, comrade!’

• Snowball does not become involved in the hard manual labour of the farm but takes the role of managing the other animals. Snowball’s hypocrisy is evident here and undermines his professed belief that ‘all animals are equal’. There is a huge difference between the physical effort of manual labour and the much easier job of supervision which is a ‘natural’ role for himself and the pigs as they are more intelligent.

• The imperative verb ‘gee’ is a clear command to the working animals and implies that Snowball and the pigs are in charge.

Context: Orwell kept farmyard animals himself and drew on his knowledge of these animals, such as the intelligence of pigs, when writing his novel.

‘without halting for an instant’

• Snowball leads the charge on the attacking humans in the Battle of the Cowshed.

• The clause shows how brave Snowball is, with such faith in the revolution that he is willing to die for it.

Context: Like Snowball, Trotsky was a great military campaigner and was one of the founders of the Red Army.

‘almost every animal on the farm was literate in some degree’

• Snowball’s reading and writing classes are a success.

• His commitment to educating the animals shows Snowball in a positive light, as a leader who wishes to see all animals become empowered.

• Alternatively, Snowball’s interest in education could be a clever excuse for him to build up a powerbase in his rivalry with Napoleon. This is perhaps suggested through the third person narrative which dispassionately notes that the animals are literate ‘in some degree’, the determiner ‘some’ indicating that the classes were not particularly successful. Maybe Snowball’s real aim was to create a loyal following under the pretence of forming education classes.

‘in glowing sentences, he painted a picture of Animal Farm… with electric light, hot and cold water’

• Snowball’s ideas for the windmill are based on a desire for technology to improve the lives of the working animals, showing his intelligence as he plans ahead, understanding difficult concepts such as electricity.

• The adjective ‘glowing’ suggests his visionary hopes for the future as something bright and full of hope and shows him to be an articulate public speaker who is able to sway opinion. As such, he is a clear threat to Napoleon, who does not bother to debate with Snowball but sends in his vicious dogs to exterminate his brilliant rival. Snowball’s eloquence contrasts with Napoleon’s reticence (dislike of public speaking).

Context: Orwell fought in a Trotskyist group during the Spanish Civil War. His portrayal of Snowball, the allegorical figure for Trotsky, is more favourable that his portrayal of Napoleon, perhaps because of this connection.

• Snowball is expelled from the farm, chased by Napoleon’s vicious dogs.

• The adjectives ‘enormous’ and ‘brass-studded’ in the description help create a sense of violent brutality while the verb ‘dashed’ shows their speed. Napoleon has the dogs well-trained in his service and uses them ruthlessly throughout the novel to control the animals through fear and intimidation.

• Structurally, this is an important turning point in the story as it is the moment that Napoleon seizes complete power. With the expulsion of Snowball, Napoleon has eliminated the only serious contender for power.

‘He stole the corn, he upset the milk-pails, he broke the eggs’

• Once expelled from the farm, Snowball is blamed for everything that goes wrong on the farm.

• Napoleon uses his old enemy to create a useful scapegoat. Snowball becomes part of Napoleon’s armoury of ways in which to control the animals by demonising the absent pig into a malevolent force who is intent on destroying Animal Farm.

• The list here shows the range of sly, mischievous activities that Snowball is accused of, and also highlights the ridiculousness of the accusations.

Does the reader feel any sympathy for Snowball?

Yes: His passionate enthusiasm is almost infectious as he works to improve the farm in a way that is ‘indefatigable’, showing his real determination and dedication towards the cause of animal equality. Despite the failure of many of his projects, he perseveres with success at his education programme and his bravery at the Battle of the Cowshed is remembered by the readers, if not the animals. He is altogether a more likeable, genuine leader than Napoleon and, with his eviction, the fortunes of Animal Farm turns inexorably for the worse.

No: He is ultimately as corrupt as Napoleon, taking the milk as his privilege from the very first day of the revolution. This betrayal undermines his fine words about equality and shows him to be as corrupt as any other leader in power.

Context: As a result of his own experiences fighting during the Spanish Civil War, Orwell became disillusioned in the power or success of revolutions, seeing them simply as swapping one master for another. Snowball’s presentation seems favourable compared to the brutal Napoleon but we should question whether he would have been any more resistant to the corrupting influence of power if he had stayed on the farm. 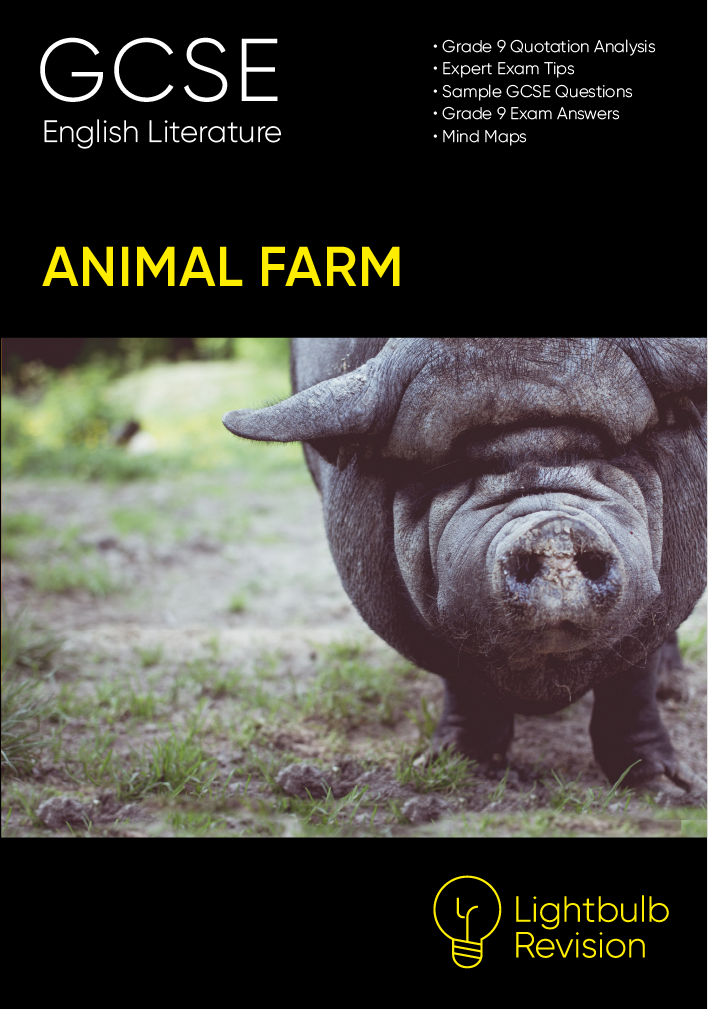